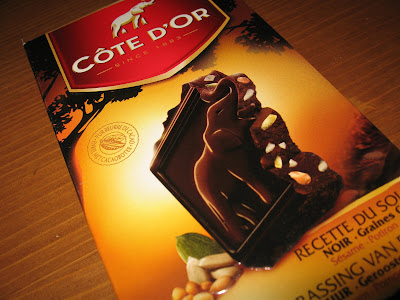 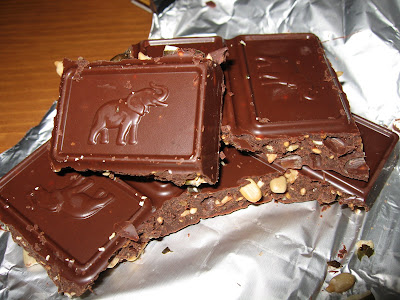 Luckily there is a large chocolate section in every grocery store in France. New chocolate bars make their appearance every season and I like trying all of them! The latest bar I discovered, fell in love with and keep in stock at all times, is the Côte D'Or "Recette du Soleil", or Sunshine Recipe. Dark, velvety chocolate, toasted sunflower seeds, salted pumpkin seeds and caramelized sesame seeds all wrapped up into a bar.

No luck so far on finding this one in America or online, but if you are in Europe soon pick one up at the local grocery!

This blog posted a description about Côte d'Or chocolate.
Posted by Out and About Uzès at 4:06 PM 1 comments 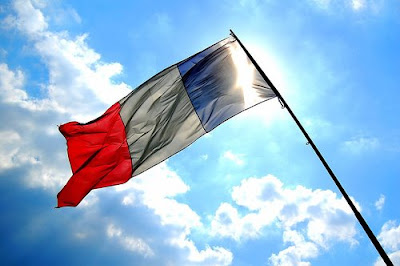 Bastille Day is the French national holiday, celebrated on 14 July each year. In France, it is called Fête Nationale ("National Celebration") in official parlance, or more commonly le quatorze juillet ("14 July"). It commemorates the 1790 Fête de la Fédération held on the first anniversary of the storming of the Bastille on 14 July 1789; the anniversary of the storming of the Bastille fortress-prison was seen as a symbol of the uprising of the modern nation, and of the reconciliation of all the French inside the constitutional monarchy which preceded the First Republic, during the French Revolution. (http://en.wikipedia.org/wiki/Bastille_Day)

Listen and read along, in English and French, to the French National Anthem.

Posted by Out and About Uzès at 5:20 PM 0 comments 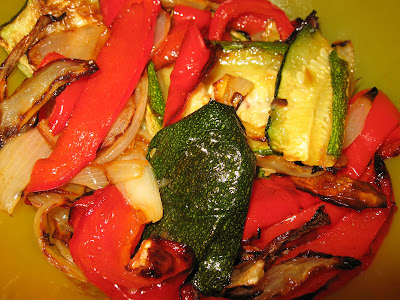 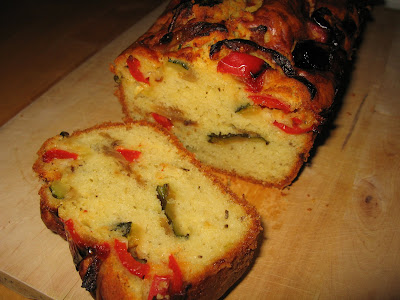 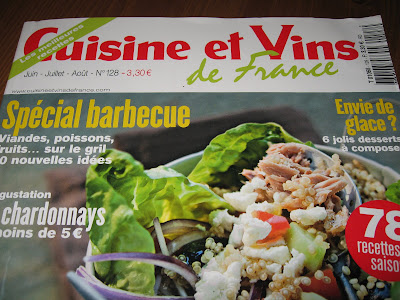 Here's a recipe from the French version of Food and Wine Magazine, called Cuisine et Vins de France. This Roasted Vegetable Loaf is perfect for picnics, barbecues or apéritifs.

Roasted Vegetable Loaf
Preheat oven to 375°F. Grease a loaf pan with butter or oil. Slice the vegetables so they are approximately the same size and toss with olive oil, salt and pepper. Roast until golden and tender. Let veggies cool. Meanwhile, mix the dry ingredients together in a bowl and the liquid ingredients in another bowl. Make a well in the dry ingredients and add the liquid. Whisk until completely incorporated. Pour 1/3 of the batter into the prepared loaf pan, top with 1/3 roasted veggies, repeat two more times. Bake for 40-50 mins until a knife comes out clean. Let cool and serve at room temperature.
Posted by Out and About Uzès at 3:36 PM 1 comments 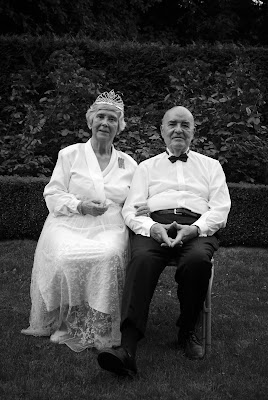 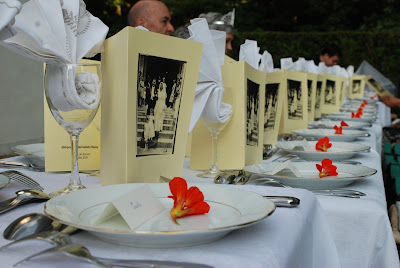 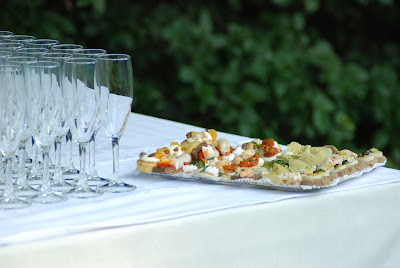 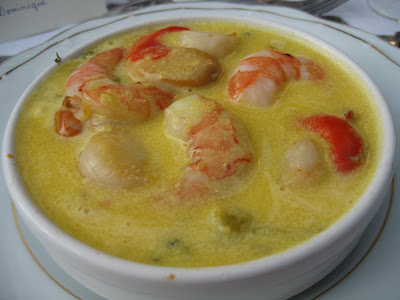 No, this is not the King and Queen of France. I introduce to you, Jacques and Bernadette Bleuze, Christophe's grandparents whom with we just celebrated their 60 year wedding anniversary. This was not JUST a celebration, but an entire weekend of food, family and activities.
Bernadette, whom everyone calls Grandmère, had made lists, menus, sleeping arrangements and called upon the caterer, all before our arrival on Thursday evening. Friday morning started early with coffee and brioche, followed by helping in the kitchen and then a late lunch. Grandmère had baked quiche, boiled green beans and prepared a big bowl of rhubarb from the garden for dessert. This lunch was only the beginning of many meals throughout the weekend. But the prize winner was the caterer's dinner. Scallops with the coral and large pink shrimp simmered in a cream, leek sauce to die for. That could of been enough for me, but there was much more to come...duck breast in a cherry sauce, prosciutto wrapped asparagus, baby greens tossed in walnut oil, goat cheese and a plate of five different desserts. And let's not forget the Champagne! Grandmère had specifically chosen the Champagne Lanson because that is the Champagne she drank the night the Americans landed to liberate France, 65 years ago.

This weekend was not a experience that you would be able to duplicate and I felt so lucky to be involved, which I why I am writing about it. A weekend rich in history, food and love. I would like to be exactly like Bernadette Bleuze when I am her age...89.
Posted by Out and About Uzès at 12:13 PM 0 comments