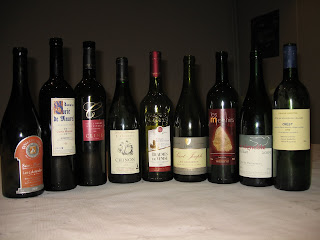 Mom and I watched this really great movie, Bottle Shock, based on the true story of the 1976 blind wine tasting in Paris, that has come to be known as "Judgment of Paris". A British sommelier collected wines from California, Bordeaux and Burgundy for a blind wine tasting in Paris. The judges for the tasting were mostly French and included sommeliers from some of the finest restaurants in France. The result...shocking, but you have to see the movie to find out!

After seeing the movie, I decided it would be fun to take a California wine to our wine tasting class. Our final class was a blind wine tasting of wines from all over France. We were to try and figure out what region the wine came from, which cépages (grape varieties) were used and the year each bottle was produced. The bottles were covered with aluminum foil and served in no particular order.

What we tasted:
When we started tasting the Cline Estates, people immediately started saying "Ooh la la. This is not a wine I am familiar with." Hints of white pepper and licorice had everyone perplexed. What could this wine be?

After tasting the wine, without spitting, everyone agreed the wine was delicious and interesting. Then it was revealed to be a Californian wine, and...gasp! Some had already experienced a Californian wine and for others it was their first time. The entire class, including our teacher, were very impressed. At the end of class, we finished off the bottle with French cheese and bread. An shockingly yummy wine tasting! 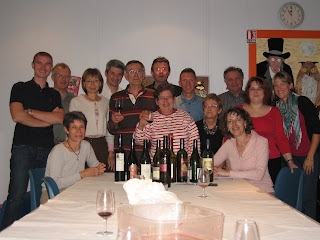 Posted by Out and About Uzès at 2:40 PM 1 comments

Wow! We took a "French style" vacation and spent 7 weeks in Florida. Lovely time, but now we are back to the reality of work and blogging. So much to write, so little time.

What are we working on now? A new business, A Taste of France Tours, designing food & wine adventures in the South of France for any foodies who want to come. Our website will be launched soon and you will be able to see what it's all about!

Even though the website is in the works, we were able to book our first tour for a friends upcoming wedding in Provence. We custom designed a day of wine tasting in Châteauneuf du Pape, one of the most famous wine regions in France, for friends and family of the soon to be married couple. The tour will be taking place the Thursday before the wedding day and includes visits and wine tastings at 3 château wineries and a gourmet picnic in the middle of vineyards. It will be a day of fun and wine in the South of France!
Posted by Out and About Uzès at 4:37 PM 3 comments